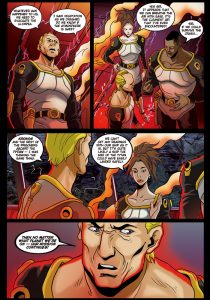 Orlando, FL, May 24, 2017 — Red Giant Entertainment Inc. (REDG), an innovative Intellectual Property company specializing in high quality characters and content for use in a variety of media and entertainment, today announced that the launch of Absolute Comics Group will include the value-priced $1.99 monthly title WAYWARD LEGENDS.

“With WAYWARD LEGENDS and its spin-offs being the cornerstone of Absolute Comics Group’s company-owned ‘CORE’ universe, we wanted an inexpensive, easy, entry point for new readers and collectors,” said series creator, Benny Powell.

WAYWARD LEGENDS will include stories originally published online as the massively popular WAYWARD SONS: LEGENDS webcomic. Although twenty-five issues, or more than two years’ worth of material, were completed, it has never been printed in comic book format before. The webcomic will be taken offline, making the $1.99 print comic and the Powfolio comics reading app the only venues it can be found.

The LEGENDS series centers on two groups of diverse warring aliens who crash-landed on earth over five thousand years ago. The war between them would inspire every myth, legend and fairy tale in human history. It also serves as the source for the spin-off modern title, WAYWARD SONS, which revolves around the half-human children of these beings. Additionally, LEGENDS will tie into numerous other Absolute Comics titles as well, forming the center glue that binds the “Core” Absolute Comics universe.

“Comics went from a dime to twelve cents in around 1962. That’s roughly a dollar in today’s money,” said David Campiti, COO of Red Giant. “The $1.99 price point makes great sense for today’s comics — printed on high-quality paper with more pages of stories and art than you’d get in a comic back then. It’s less than half of what the big guys are charging for their core titles.”

About Red Giant Entertainment Inc.
Red Giant Entertainment Inc. (OTC: REDG) is a Florida corporation that specializes in intellectual property (IP) development for multiple media platforms and transmedia propagation. The cornerstone of this development is based around the more than three dozen online and print graphic novel properties in various stages of production as well as the cast of thousands of characters from those series. These properties have a readership that numbers in the millions globally. Some of these properties are actively in development into other media such as movies, video games, television, novels, toys, apparel, applications, etc. through either direct production or licensing agreements.

Forward Looking Statements
This press release may contain “forward-looking statements.” Any statements that are not statements of historical fact, including but not limited to statements containing the words “believes,” “plans,” “anticipates,” “expects,” “look forward,” “estimates” and similar expressions, should be considered to be forward-looking statements. Actual results may differ materially from those indicated by such forward-looking statements as a result of various important factors, to include acquisition, production, marketing, distribution, competition with related patent, trademark and license issues involving contractual obligations and concessions. The Company does not assume any obligation to update any forward-looking statements to reflect events or circumstances after the date of this press release, except as required by applicable law. The Company files annual, quarterly and current reports, proxy and information statements and other information with the Securities and Exchange Commission. This press release should be read in conjunction with all of the reports that the Company has previously filed with the Securities and Exchange Commission for financial and other information about it. The references to the websites http://redgiantentertainment.com and www.facebook.com have been provided as a convenience, and the information contained on such websites is not incorporated by reference into this press release.